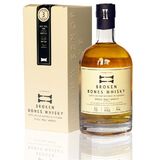 The entire distillation process is completed on site and maturation occurs at warehouses located on premises and in parkland just outside Ljubljana. The finest malted barley is mashed with exceptional Slovenian water - some of the purest in the world - and fermented with specially selected yeast. The resulting wash is slowly distilled in a traditional double distillation process before maturation in Slovenian Sessile Oak barrels, providing a full-bodied taste with fruity and floral notes.

For a more complex and elegant flavour, maturation also takes place in American white oak bourbon barrels, and their peated expression is made from peated malt and finished in barrels that previously contained the peatiest Scotch whisky from Islay for added punch.

The warehouses where the whisky matures are surrounded by untouched forest, which means their whisky breathes only the cleanest, purest air. Continuing the theme of natural processes, Broken Bones Whisky is not chill-filtered and has no added colour and with all their whisky carefully produced in small batches each batch is unique, producing a smooth, complex and elegant single malt. The strong Slovenian influence used in combination with the Scottish tradition of whisky making gives Broken Bones Whisky a truly unique character.

Broken Bones distillery - established in 2012 as a result of the passion of three friends that share family tradition in beer, wine and liquor production - is the first distillery in Ljubljana in at least 60 years

The combination of the co-founders different backgrounds (Borut philosophy, Boštjan computing and Polona sales & marketing) is part of the secret behind the development of exquisite, surprising and bold Broken Bones spirits.

Broken Bones is built on dreams, passion, a broken leg, teamwork, a broken nose, family values, calculated risks and hard work. For example after researching Scottish stills they decided to build their own, learning to solder to get the job done together, producing a one-of-a-kind 250L straight necked still, not too tall, with a downward sloping arm resulting in a slightly heavier spirit.

Their classic expression aims for a mellow and fruity experience with a full body, which is why they designed their still that way - to take most of the flavour through the distillation process into the new make spirit. They use 20% peated and 80% unpeated barley shipped from Belgium and the Netherlands, go through 2 mashes to produce 500L of wort, then do two 250L runs of distillation plus some recycling of the cuts. Maturation begins in virgin Slovenian Oak casks (constructed by a local traditional cooperage), before being transferred into either ex-bourbon casks or heavily peated Scottish casks. I was lucky to be the first outsider to visit their secret bond store and while I can’t say too much, it's bordered by a turquoise river, surrounded by beautiful countryside and filled with at least 10 (but not more than 20) casks of maturing Slovenian single malt whisky.

Location wise, Ljubljana is surrounded by protected marshland filled with Slovenian peat, something the team at Broken Bones are keen to get their hands on. Climate wise, with similar temperature changes to India and Taiwan (hot summers and cold winters), we expect a higher angels share but also a faster and more complex maturation process as the wood is pushed and pulled with the temperature extremes.

Broken Bones have succeeded in putting Slovenia on the global whisky stage with a premium single malt to be proud of that already holds its own next to Scottish and other world class whiskies.

Broken Bones at a glance